Hideki Matsui is a former Japanese professional baseball player who has a net worth of $40 million. Matsui was born on June 12, 1974 in Neagari, Ishikawa, Japan and was most famous for his roles as outfielder and designated hitter in Major League Baseball. Playing for both American and Japanese teams, Matsui made his Japanese debut on May 1, 1993 with the Yomiuri Giants, and premiered with the New York Yankees on March 31, 2003.

He maintained a batting average of .304, hit a total of 332 home runs, and has a record of 889 runs batted in for the NPB. His American career statistics include a batting average of .282, a total of 175 home runs, and an accumulation of 760 runs batted in. Following the Yomiuri Giants, Matsui went of to play for the New York Yankees from 2003 to 2009, the Anaheim Angels in 2010, the Oakland Athletics in 2011, and the Tampa Bay Rays in 2012. In Japan, he was a nine-time All-star, a three-time Japan Series champion, a three-time CL MVP, received the Best Nine Award eight times, is a three-time NPB All-star Game MVP, received the Japan Professional Sports Grand Prize in both 2000 and 2003, was the Japan Series MVP in 2000, and earned the Matsutaro Shoriki Award in 2000. His American career highlights include being a two-time All-star in 2003 and 2004, a 2009 World Series champion, and the title of World Series MVP in 2009. Matsui is known for his charitable donations to victims of the 2004 Indian Ocean earthquake as well as victims of the 2011 tsunami in Japan. 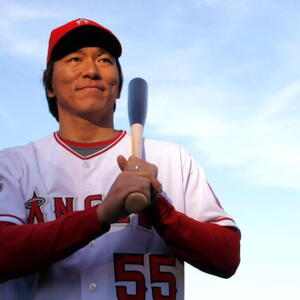