Hanley Ramirez Net Worth: Hanley Ramirez is a Dominican professional baseball player who has a net worth of $50 million. During his time in Major League Baseball, which began in 2006, Hanley earned $160 million in salary. He earned a career-high $22.75 million per season.

Born in Samana, Dominican Republic, in 1983, Hanley Ramirez landed a free agent contract with the Boston Red Sox during the summer of 2000. He played in the Red Sox's farm system before making his major league debut with the club on September 20, 2005. He was promptly traded to the Florida Marlins the same year, where he played until 2012. During July of 2012, Ramirez was dealt to the Los Angeles Dodgers. He has played with the Dodgers ever since and is currently in Los Angeles as of the fall of 2014. Through September 13, 2014, Ramirez has a career batting average of .299. He has 1,387 hits, 191 home runs, 649 runs batted in, 261 stolen bases, and has scored 803 runs. Ramirez is a three-time MLB All-Star (2008-2010), and led the National League in runs scored in 2008. He was the National League Rookie of the Year in 2006 and the batting leader in 2009. He won the Silver Slugger Award in 2008 and again in 2009 and was part of the 30-30 club in 2008. Ramirez has appeared in two World Baseball Classics and won in 2013. He has two sons with his wife, Sanoe, and enjoys DJ'ing when he's not playing baseball. 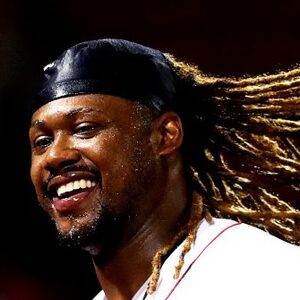