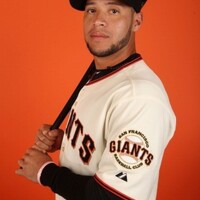 Gregor Blanco net worth: Gregor Blanco is a Venezuelan professional baseball player who has a net worth of $2 million. Gregor Blanco was born in Caracas, Venezuela in December 1983. Blanco is an outfielder who bats and throws left handed. He was signed by the Atlanta Braves in 2004 as an undrafted free agent. After playing in the minor leagues Blanco made his Major League Baseball debut for the Braves in 2008 where he played until 2010 when he was traded to the Kansas City Royals. In 2011 Blanco was trade to the Washington Nationals. He signed a minor league contract with the Giants in 2011 and was named to their 2012 Opening Day roster. Blanco had a 306 game errorless streak which ended in September 2014. As part of the San Francisco Giants he won a World Series Championship in 2012.