How much is Greg Maddux Worth?

Greg Maddux net worth: Greg Maddux is a former Major League Baseball player who has a net worth of $70 million dollars. During his career, Greg Maddux earned just under $160 million in salary alone, before taxes. Born in San Angelo, Texas, Greg Maddux grew up in Madrid, Spain. After returning to the United States, he and his brother Mike Maddux began focusing on baseball. He played very well during high school, but his slight build caused many colleges to shy away from recruiting him. He decided to declare eligibility for the 1984 draft, and was signed by the Chicago Cubs. He played his first Major League game with the Cubs in 1986. His first full season as a pitcher in the Major Leagues was rough, but by 1988, he'd hit his stride. He went on to pitch the most successful streak in Major League history, pitching seventeen straight seasons of 15 or more wins. He went on to play for the Atlanta Braves from 1993 to 2003. While with the Braves, he struck out over 200 batters in one season in 1998. He went on to play for the Cubs again, the Los Angeles Dodgers twice, and the San Diego Padres. He retired in 2008, after winning 18 Gold Glove Awards and four CY Young Awards. 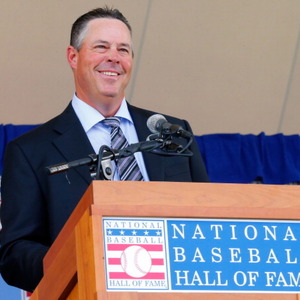