Greg Holland net worth: Greg Holland is an American professional baseball player who has a net worth of $3 million. Greg Holland was born in Morganton, North Carolina in November 1985. Holland is a pitcher who bats and throws right handed. Greg attended McDowell High School and Western Carolina University. He was drafted in the 10th round of the 2007 Major League Baseball Draft by the Kansas City Royals.

Holland played in the minor leagues for the Idaho Falls Chukars, Wilmington Blue Rocks, Northwest Arkansas Naturals, and Omaha Royals. He made his MLB debut for the Royals in 2010 and has played for Kansas City ever since. Holland is a two time MLB All-Star in 2013 and 2014. In the 2014 American League Championship Series Holland tied a playoff series record by saving four games. Through the 2014 season he has a record of 15 – 10 with 381 strikeouts, 113 saves, and an earned run average of 2.19. Greg is married to his wife Lacey and the couple had their first child in October 2014. 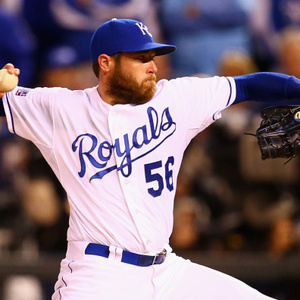