Grady Sizemore Net Worth: Grady Sizemore is an American professional baseball player who has a net worth of $13 million. Born in Seattle, Washington, in 1982, Grady Sizemore intended to play college baseball and football for the University of Washington. Before he had an opportunity to attend college, however, the Montreal Expos drafted him during the third round of the Major League Baseball draft in 2000. He made his pro playing debut on July 21, 2004 as a member of the Cleveland Indians. Sizemore played with the Indians until 2011. He began battling several injuries and did not play again until singing a one-year contract with the Boston Red Sox in 2014. He finished the 2014 season with the Philadelphia Phillies, and, as of the end of the season, is still a member of the team. Sizemore, a left-handed center fielder, has a .266 batting average through 2014. He has amassed more than one thousand hits, 144 home runs, 485 runs batted in, 140 stolen bases, and 636 runs scored. Sizemore is a three-time MLB All-Star and a two-time Gold Glove Award winner. He won the 2008 Silver Slugger Award, the same season he joined the 30-30 club. In 2006, Sizemore led the American League in both runs scored and doubles hit. 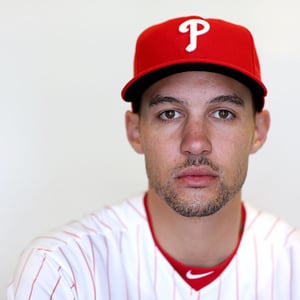