Gio Gonzalez Net Worth: Gio Gonzalez is an American professional baseball player who has a net worth of $26 million. Gio Gonzalez was born in Hialeah, Florida, in 1985. The Chicago White Sox drafted him during the first round of the 2004 MLB Draft; a year later, he was dealt to the Philadelphia Phillies before he was traded back to the White Sox during the winter of 2006.

Gonzalez, a highly regarded prospect at the starting pitcher position, made his MLB debut on August 6, 2008 for the Oakland Athletics. He played in Oakland until 2011 before joining the Washington Nationals in 2012. As of the fall of 2014, Gonzalez remains with the Nationals. The left-handed pitcher bats right. He is a two-time back-to-back All-star (2011, 2012) and led the National League in wins in 2012. He won the Warren Spahn Award the same year, given annually to the best left-handed pitcher in pro baseball. Through the 2014 season, Gonzalez has amassed a 80-58 career win-loss record, a 3.59 earned run average, and 1,072 strikeouts. Gonzalez is the founder of the GIO foundation, which stands for Giving Individuals Opportunities, and is an organization that has been helping sick or injured patients deal with their medical bills since 2012. 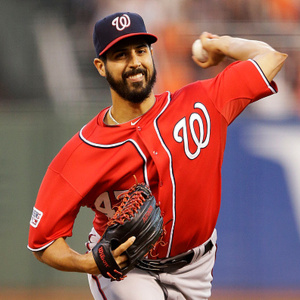