Giancarlo Stanton Net Worth and salary: Giancarlo Stanton is an American professional baseball player who has a net worth of $40 million. Giancarlo Stanton was born in Panorama City, California in November 1989. He is a right fielder who bats right and throws right handed. He was a three sport athlete in high school and accepted a scholarship to play for USC before being drafted #76 by the Florida Marlins in the 2007 MLB Draft. Before the 2012 season Giancarlo went by the name Mike Stanton. Stanton made his major league debut for the Marlins in June 2010 and has played for Miami his entire career. He is a two time MLB All-Star in 2012 and 2014. In his first five seasons Giancarlo hit 150 home runs and had nearly 400 RBI. In April 2014 he hit a walk-off grand slam against the Seattle Mariners. In September 2014 Stanton was hit in the face by a pitch from Mike Fiers of the Milwaukee Brewers. Stanton was taken off the field on a stretcher and had dental damage, multiple facial fractures, and lacerations. In September 2014 the Marlins announced that he would not play for the rest of the season.

On November 13, 2014 it was revealed that Giancarlo Stanton had signed a record-setting $325 million 13-year contract with the Miami Marlins. This was the largest contract in US sports history at the time. Starting in the 2015 season, Giancarlo will earn an average of $25 million per year, roughly $155,000 per game. If he bats on average three times per game, that will be $50,000 per at bat. The landmark deal comes with a no-trade clause, but Giancarlo can opt-out after six years (but why would he??). This 13-year $325 million deal tops the previous record holder Miguel Cabrera's 10-year $292 million deal. 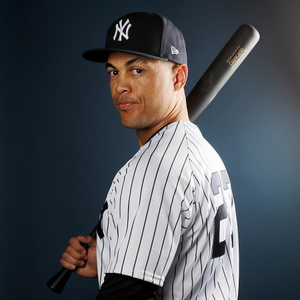