George Springer net worth: George Springer is an American professional baseball player who has a net worth of $20 million. George Springer was born in New Britain, Connecticut in September 1989. He is an outfielder who bats and throws right handed. Springer was Big East Conference Baseball Player of the Year at the University of Connecticut. He was drafted #11 overall in the 2011 Major League Baseball Draft by the Houston Astros. Springer made his MLB debut in 2014 for the Astros. In 2017 he won the World Series with Houston and was named World Series MVP. He also won the Silver Slugger Award in 2017 and was an MLB All-Star in 2017 and 2018. George Springer earned a $2.52 million signing bonus and at one point he rejected a seven year deal worth $23 million before he made it to the major leagues. During his first five seasons with the Astros he hit 120 home runs and drove in 328 RBI.

Toronto Contract: On January 20, 2021, it was revealed that George had signed a six-year $150 contract with the Toronto Blue Jays. It is the largest contract ever given by Toronto, topping the $100 million extension given to Vernon Wells in 2006. 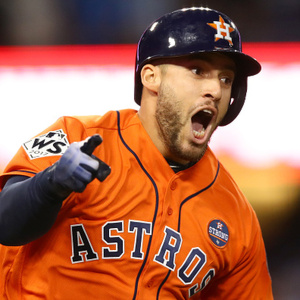