Gary Carter net worth: Gary Carter was an American former professional baseball player who has a net worth of $13 million. Gary Carter was born in Culver City, California in April 1954 and passed away in February 2012 . He was a catcher who batted and threw right handed. He played quarterback in high school and signed a letter of intent to play QB for the UCLA Bruins before he was drafted by the Montreal Expos in the 1972 Major League Baseball Draft.

Carter made his MLB debut for the Expos in 1974 and played for Montreal until 1984. He then played for the New York Mets from 1985 to 1989 and the San Francisco Giants in 1990. Carter finished his career with the Los Angeles Dodgers in 1991 and the Expos in 1992. He won a World Series championship in 1985 with the Mets and was an 11 time MLB All-Star. Carter was a three time Gold Glove Award winner and a five time Silver Slugger Award winner. He was twice named the MLB All-Star Game MVP and won the Roberto Clemente Award in 1989 and the NL RBI championship in 1984. Carter's #8 was retired by the Montreal Expos and he was inducted into the New York Mets Hall of Fame. In 2003 he was inducted into the National Baseball Hall of Fame. Gary Carter passed away on February 16, 2012 at 57 years old from brain cancer. 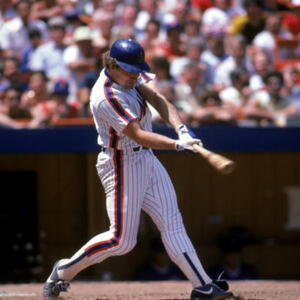