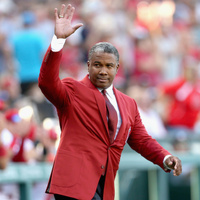 Garret Anderson is a former American professional baseball player who has a net worth of $40 million. Born on June 30, 1972 in Los Angeles, California, Anderson was known for his position as left fielder in Major League Baseball. Anderson was a triple threat in baseball, basketball, and football in attendance at John F. Kennedy High School and made his MLB debut on July 27, 1994 with the California Angels. He maintained a batting average of .293, a record of 287 home runs, a total of 2,529 hits, and an accumulated 1,365 runs batted in. Following the Angels, Anderson played for the Atlanta Braves and lastly for the Los Angeles Dodgers in 2010. He was a three-time All-star selection, a World Series champion in 2002, a two-time Silver Slugger Award winner for the years 2002 and 2003, the MLB All-Star Game MVP in 2003, and the winner of the Home Run Derby in 2003. Anderson made his last MLB appearance on August 6, 2010 with the Los Angeles Dodgers and officially retired on March 1, 2011. He is currently a reporter for Fox Sports West and is married to Teresa Anderson. They have three children by the names of Bailey, Brianne, and Garret III.