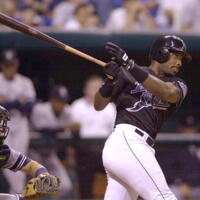 Fred McGriff Net Worth: Fred McGriff is a left-handed former professional baseball player who has a net worth of $30 million. Fred McGriff represented numerous Major League Baseball teams starting from the mid-1980s through to the early 2000s. As a tall, lankily-built power-hitting first baseman, the five-time All-Star, in 1992 became the first player in baseball's modern era to lead both major leagues in total home runs. While he never achieved more than37 home run hits in a single season, he still managed to end his career just 7 homers short of joining the highly exclusive 500 home run hits club. In 1995, McGriff won the World Series playing a first baseman on the Atlanta Braves. He ended his career after 10 seasons with most of them having over 30 home run hits.

McGriff was born on October 31, 1963 in Tampa, Florida and first became a prospect in the early 1980's playing in the New York Yankees minor league baseball system. He was a ninth round draft pick by the Yankees in 1981's amateur draft and went on to sign for them on June 11, 1981. He was subsequently traded to the Toronto Blue Jays in 1982 where he became the first baseball player to hit a home run in that city's Rogers Center.
McGriff's work with the American police in raising children's awareness on crime prevention has earned him the nickname, "Crime Dog", which is based on McGruff, a cartoon pooch that was specifically created for that purpose. He is currently working as an advisor in the Tampa Bay Rays' main office, as well as a co-host of The Baysball Show on the Bright House Sports Network.