Robinson made his Major League Baseball debut for the Cincinnati Reds in 1956. He played for the Reds until 1965 and then for the Baltimore Orioles from 1966 to 1971. He also played for the Los Angeles Dodgers in 1972, the California Angels from 1973 to 1974, and the Cleveland Indians from 1974 to 1976. Robinson won two World Series championships with the Orioles in 1966 and 1970. He was named National League MVP in 1961 and American League MVP in 1966. In 1966 he was named World Series MVP and won the Triple Crown. Robinson was a 14 time All-Star and won the NL Rookie of the Year in 1956 and the MLB All-Star Game MVP in 1971. He also won a Gold Glove Award in 1958 and has had his #20 retired by the Cincinnati Reds and the Baltimore Orioles. Robinson managed the Cleveland Indians, San Francisco Giants, Baltimore Orioles, and Montreal Expos/Washington Nationals. He also coached the Angels, Milwaukee Brewers, and Orioles and was named AL Manager of the Year in 1989. Robinson was inducted into the National Baseball Hall of Fame in 1982. He served as the honorary President of the American League. Frank Robinson died on February 7, 2019 at the age of 83. 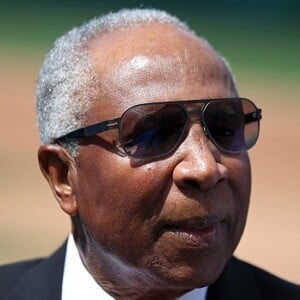