Fernando Valenzuela net worth: Fernando Valenzuela is a Mexican former professional baseball player who has a net worth of $6 million dollars. Fernando Valenzuela was born in Navojoa, Sonora, Mexico, and though his birth date was listed as 1960, there was some question as to whether this was true. He began playing baseball professionally in 1977, pitching for various teams in the Mexican Central League. He was drafted by the Los Angeles Dodgers in 1979, and began pitching for them at the end of the 1980 season. He started the season with the Dodgers in 1981, and went on to pitch one of the most successful rookie seasons ever. He was the first player to win both the Cy Young Award and the Rookie of the Year Award, and he became the first rookie to lead the league in strikeouts. He also won the Silver Slugger Award in 1981. He went on to rack up more accolades over the course of his career, but eventually his play became inconsistent. He attempted multiple comebacks, but left Major League Ball for good in 1997. He has since played briefly for the Mexican League, but primarily focuses on Spanish-language sports broadcasting and coaching. 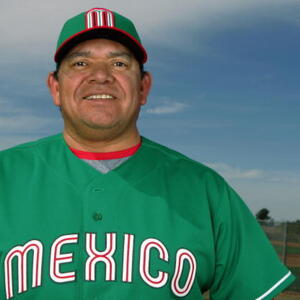