Evan Longoria net worth and salary: Evan Longoria is an American professional baseball player who has a net worth of $30 million. Evan Longoria has earned his net worth as third baseman for the Tampa Bay Rays. Longoria was the winner of the 2005 Cape Cod League MVP award, as well as the 2006 Big West Co-Player of the Year. His first major league game was with the Rays in 2008. That same year he was chosen to be on the American League All Star team. Also in 2008 he was named American League Rookie of the Year. Evan was born on October 7, 1985 in Downey, California. He attended St. John Bosco High School, and he was a two-year letterman in baseball.

As a senior in high school he was a first team All-Serra League selection. He did not get recruited by any college, due to the fact that his 6-foot-1, 170 pound body was considered too slim by Division I baseball standards. During his freshman year at Rio Hondo Community College he played baseball in the position of short-stop. Longoria earned first-team All-State honors, and he was eventually offered a scholarship by Long Beach State University. He transferred to LBSU during his sophomore year and hit .320, earning him All-Conference honors. Longoria played third base, because LBSU already had an established shortstop. Longoria continue to have success in the minor leagues and after just eight games with the Single-A Hudson Valley Renegades. He moved up to the Visalia Oaks where he impressed the organization with his quick success, hitting .327 with 8 home runs and 28 RBI's in 28 games. He was drafted in the MLB by the Tampa Bay Rays as the third overall pick of the 2006 Major League Baseball Draft. He signed a six-year, $17.5 million contract with options for 2014, 2015, and 2016. 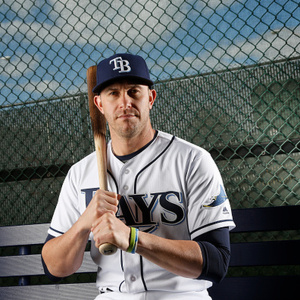