Eric Hosmer Net Worth: Eric Hosmer is an American professional baseball player who has a net worth of $2 million. Eric Hosmer was born in Miami, Florida in October 1989. Hosmer is a first baseman who bats and throws left handed. Eric played for several Little League teams and won a couple of state championships.

He played at American Heritage School and made the top 10 of USA Today's Super 25 rankings. Hosmer was named Florida's Baseball Player of the Year twice and won the American Amateur Baseball Congress Connie Mack MVP Award. He was offered a scholarship by Arizona State University. He was selected in the first round of the 2008 Major League Baseball Draft by the Kansas City Royals and signed a $6 million dollar signing bonus which was the highest in Royals history. Hosmer played in Kansas City's minor league system with the Idaho Falls Chukars, Burlington Royals, Wilmington Blue Rocks, Northwest Arkansas Naturals, and Omaha Storm Chasers. Eric Hosmer made his MLB debut in 2011 for the Royals and he has played there his entire career. Hosmer won a Gold Glove Award in 2013. He was third in Rookie of the Year voting for the 2011 season. Through the 2014 season he has 59 home runs and 275 runs batted in with a batting average of .275. 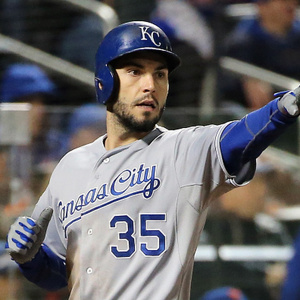