Eric Byrnes net worth: Eric Byrnes is a former American Major League Baseball player who has a net worth of $12 million. Eric Byrnes was born in Redwood City, California on February 16, 1976, and  is best known for playing for the Oakland Athletics, Colorado Rockies, Baltimore Orioles, Arizona Diamondback, and the Seattle Mariners as an outfielder. He made his MLB debut on August 22, 2000 with the Oakland Athletics and made his last appearance on May 2, 2010 with the Seattle Mariners. His career statistics include a batting average of .258, a total of 109 home runs, and a total of 396 runs batted in. He currently works as an analyst for the MLB Network and is also working as a radio host for KNBR. Growing up, he attended St. Francis High School and the University of California at Los Angeles and started his baseball career after being selected in 1998 during the eighth round of the Major League Baseball Draft by the Oakland Athletics. Byrnes announced his retirement from the MLB on May 13, 2010 and currently lives in Half Moon Bay, California where he plays slow pitch soft ball and golf. He worked as an analyst in 2006 for Baseball Tonight on ESPN and began working for KNBR in 2011; he is also an analyst for Pac-12 Network. 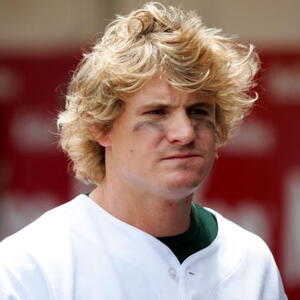