Edwin Encarnación Net Worth Net Worth

Edwin Encarnación Net Worth: Edwin Encarnación is a Dominican professional baseball player who has a net worth of $14 million. Edwin is now first baseman and designated hitter for the Toronto Blue Jays of MLB.B.orn on January 7, 1983 in La Romana, Dominican Republic, he made his career beginnings when he was drafted by the Texas Rangers in the 2000 amateur draft and then signed with the team.

However, he saw his big pro Major League debut on June 24, 2005 playing for the Cincinnati Reds. With the Reds, Encarnación won the National League Player of the week on August 7-13, 2006. It was in 2008 that Encarnación set career highs like striking out 102 times – the first time he struck out over 100 in his career. As of July 2009 he started playing with the Blue Jays as a designated hitter. He was taken to Triple-A Las Vegas on June 23, 2010 but soon brought back to the Blue Jays on July that same year. He scored his 100th home run against the Minnesota Twins. In 2011, the Blue Jays picked up Encarnación´s club option for the 2012 season. On April 2012, Encarnación hit his fourth grand slam, leading a victory of the Jays to a 7-0 win against Seattle Mariners. Encarnación made his 1000th hit against the Kansas City Royals on August 31, 2013. 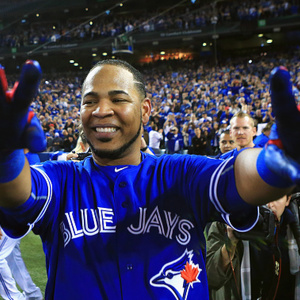