Eddie Murray Net Worth: Eddie Murray is a former American professional baseball player who has a net worth of $13 million. Born in 1956 in Los Angeles, California, Eddie Murray made his Major League Baseball debut on April 7, 1977 as a member of the Baltimore Orioles. He played with the Orioles for close to a decade until 1988 before joining the Los Angeles Dodgers from 1989 until 1991. He later played for the New York Mets from 1992 until 1993, the Cleveland Indians from 1994 until 1996, the Baltimore Orioles in 1996, the Anaheim Angels in 1997, and the Dodgers a second time in 1997. Murray last appeared with the Dodgers on September 20, 1997, more than twenty years after first making his debut. The right-handed first baseman/designated hitter finished his career with a .287 batting average, 3,255 hits, more than 500 home runs, and 1,917 runs batted in. Murray is an eight-time MLB All-Star (1978, 1981-1986, 1991). He won the only World Series championship of his career in 1983 with the Orioles. He won American League Rookie of the Year honors in 1977. Murray is a three-time Gold Glove Award winner and a three-time Silver Slugger Award winner. He won the American League home run crown and the American League RBI crown in 1981.

His number, 33, was later retired by the Orioles. Murray was inducted into the Baseball Hall of Fame in 2003. He is considered to be among the best players of all time. He returned to the Indians a coach after his retirement. He later coached for the Dodgers as well. There is a statute of Eddie outside Oriole Park.

Murray was charged with insider trading by the U.S. Securities and Exchange Commission in 2012 and ended up settling for $358,151. 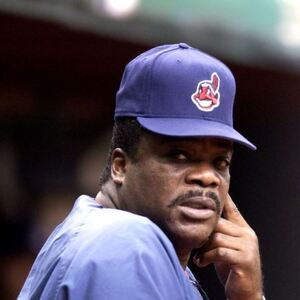