Don Mattingly net worth and salary: Don Mattingly is a former American Major League Baseball first baseman who has a net worth of $25 million. Don Mattingly earned his net worth from his baseball career and as the manager of the Los Angeles Dodgers. Nicknamed "Donnie Baseball" and "The Hit Man", he played his entire 14 year professional baseball career with the New York Yankees, from 1982-1995. Before taking his current position as manger of the Dodgers, Mattingly was a hitting coach for both the Yankees and the Dodgers. He was born in Evansville, Indiana on April 20, 1961. He attended Memorial High School in Evansville, where he helped lead the Tigers to a state record of 59 straight victories through the 1978-79 seasons. The Tigers from Memorial High School were State Champions in 1978 and State Runners-up in 1979. Don himself received the L.V. Phillips Mental Attitude honor in 1979, following his outstanding high school career he was offered a scholarship from the Indiana State Sycamores. However, due to Don being drafted by the Yankees, he decided to start his professional baseball career. Mattingly retired from the Yankees in 1997, his lifetime statistics were 2,153 hits, 222 home runs, 1,099 RBI, and a .307 lifetime average. Due to the impressive career by number 23, the Yankees dedicated a plaque that calls him "A humble man of grace and dignity, a captain who led by example, proud of the pinstripe tradition and dedicated to the pursuit of excellence, a Yankee forever." This plaque was hung in his honor in Monument Park at the Yankee's Stadium on August 31, 1997. In 2001 Don Mattingly's name was put on the Hall of Fame ballot; however since then he has not received enough votes to win the election, and be inducted as a member.

Don Mattingly Salary
At the height of his playing career Don Mattingly's salary was $4.5 million per year.

Since his retirement in 1997, Mattingly has been busy, from 1997-2003 he was a special instructor during Yankees' spring training in Tampa, Florida. In the 2003 baseball season he was switch to the position of hitting coach, during the following three years he received much praise from the players as well as the Yankee organization. Due to his coaching abilities the Yankees hit an all-time franchise record with 242 home runs in 2004. On October 26, 2006 Don replaced Lee Mazzilli as the Joe Torre's bench coach; this was a promotion from hitting coach. Don Mattingly was considered and interviewed in 2007 to replace Yankee manager Joe Torre, however the promotion went to Joe Girardi. Mattingly is divorced from Kim Sexton whom he married in 1979, they have three sons: Taylor, Preston, and Jordon, two of them attempted careers at professional baseball. Don was the owner "Mattingly's 23″ a restaurant in Evansville, Indiana during the late 1980s and early 1990s. The restaurant was named after the number he wore on his uniform for most of his career. Another business venture Mattingly tried came in 2005, when he launched a baseball and softball equipment company called Mattingly Sports, which was based primarily around the patented V-Grip baseball and softball bats. Mattingly it part of the True Dads" campaign that encourages men to take an active role in their children's lives, he has appeared in several public service announcements for this cause on the Spike TV network. 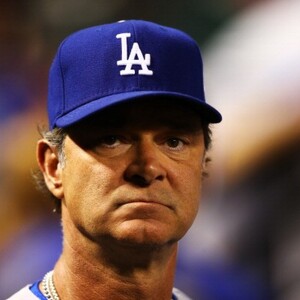