Don Drysdale net worth: Don Drysdale was an American professional baseball player and sports commentator who had a net worth equal to $3 million at the time of his death. Don Drysdale was born in Van Nuys, California in July 1936 and passed away in July 1993. He was a pitcher who batted and threw right handed.

Drysdale made his Major League Baseball debut for the Brooklyn Dodgers in 1956 and played for the Brooklyn/Los Angeles Dodgers his entire career through 1969. He won the World Series in 1959, 1963, and 1965. Don Drysdale was a nine time All-Star. In 1962 he won the Cy Young Award and was the MLB wins leader. He was a three time MLB strikeout leader. Drysdale had his #53 retired by the Los Angeles Dodgers and was inducted into the Baseball Hall of Fame in 1984 on the 10th ballot. He later became a broadcaster for radio and television. Don Drysdale passed away on July 3, 1993 at 56 years old of a heart attack. 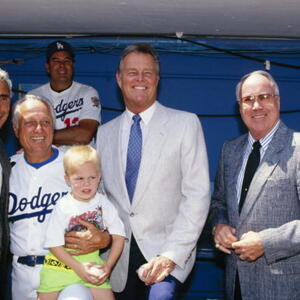