Dmitri Young Net Worth: Dmitri Young is an American retired professional baseball player who has a net worth of $20 million. Dmitri Young was born in Vicksburg, Mississippi in October 1973. He earned USA Today High School All-American honors at Rio Mesa High School in Oxnard, California. Dmitri was drafted #4 by the St.

Louis Cardinals in the 1991 MLB amateur draft. He was suspended for punching a fan in 1995. His first full season in the Major Leagues came in 1997 with the Cardinals. Young was traded to the Cincinnati Reds after the season but was then selected in the expansion draft by the Tampa Bay Devil Rays. He was then traded back to the Reds. After the 2011 season the Reds traded Dmitri Young to the Detroit Tigers where he played until 2006. Young finished his career for the Washington Nationals from 2007 to 2008. During his career he was selected to the All-Star team twice and was voted the National League Comeback Player of the Year in 2007. He spent his career as an outfielder, first baseman, and designated hitter. Young finished his career with a .292 batting average and 171 home runs. His younger brother is MLB player Delmon Young. After retiring he became the Vice President and Senior Advisor of Baseball Operations and Special Hitting and Fielding Instructor of the Oakland County Cruisers. He is the founder and president of The Dmitri D. Young Foundation, Inc. 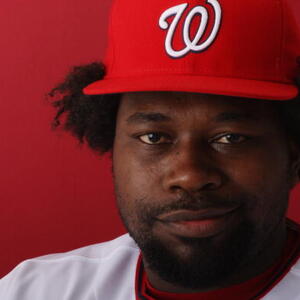