He planned to attend Georgia Tech but was drafted in the 2001 amateur draft by the New York Mets. He played for three years in the minor leagues, playing for the St. Lucie Mets, Binghamton Mets, and Norfolk Tides. In 2004 Wright made his major league debut as a starting third baseman. This Year in Baseball Awards named him the Rookie of the Year. He is a seven time All-Star and has won two Gold Glove Awards, as well as two Silver Sluggers. Wright holds franchise records for the Mets in most career RBS, doubles, total bases, walks, runs scored, sacrifice flies, extra base hits, hits, strikeouts, and times on base. IN 2013 he was named the captain of the New York Mets. Wright has played third base for the United States in the 2009 and 2013 World Baseball Classics. He earned the nickname Captain America and hit a grand slam against Italy. In 2007 he received about $20 million from Vitamin Water. He married model Molly Beers in 2013. Wright started the David Wright Foundation to increase awareness for multiple sclerosis. As of September 2018, he has earned $161 million in MLB salary alone. That's enough to make him one of the 25 highest-earning baseball players in MLB history. 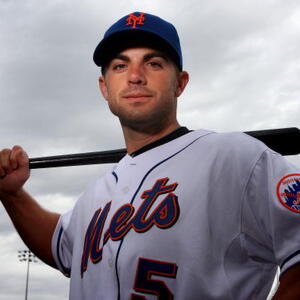