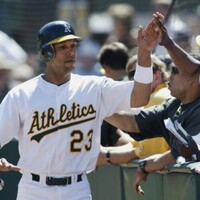 David Justice net worth: David Justice is an American athlete and former professional baseball player who has an net worth of $40 million. The Major League Baseball star acquired his net worth playing with Atlanta Braves, Cleveland Indians, New York Yankees and Oakland Athletics before retiring from the game in 2002. At the time of his retirement, David Justice's salary was $7 million per year. Justice made his baseball debut with Atlanta Brave in 1989. By the 1990 season the budding baseball player raised a few eyebrows with his outstanding performance – which earned him a National League's Rookie of the Year Award. Since then, Justice's performance was a bit rocky mainly due to an ongoing back injury. The 1995 season was particularly good for Justice's career, as he helped to lead the teammates to victory in the 1995 World Series. The following year, Justice was unexpectedly traded, to the Cleveland Indians .This came a shock for the promising player, as Brave's President, John Schuerholz told Justice the 'he won't be traded' a week before the unexpected move.

Justice's time at the Indians proved that the Braves made the wrong decision. In 1997, he continued to raise eye brows with his performance with 33 home runs as well as making his second World Series. The 1998 and 1999 seasons were also good for Justice, and the 2000 season was arguable the highlight of his career. In that season, Justice clocked up solid numbers on the scoreboards, with 41 home runs and 118 Run Batted In (RBI). After leaving the Indians on a high, Justice then moved to the New York Yankees in the summer of 2000. With the Yankees, he won the AL Championship MVP award. Unfortunately, things turned for the worst as Justice suffered a groin injury that subsequently affected his performance. The Yankees transferred Justice to the New York Mets in December 2001 and a week later, the Mets sent him to Oakland Athletics. In the first week of the 2002 season, Justice was hailed the Player of the Week. His time with the Athletics was considered as an experiment by the team's Assistant General Manager. The experiment was to test whether older baseball players can maintain their performance. Justice retired from the game the same year. Since the baseball years, Justice was a baseball commentator for ESPN for a couple of years. He then went on to YES Network as a game and studio analyst. In 2007, Justice –who was once voted as 50 Most Beautiful People by People magazine in 1994 – was inducted into the Atlanta Braves Hall of Fame in 2007. Justice and his family currently live in San Diego, and recently appeared on the ABC hit series, Celebrity Wife Swap. Justice and his wife Rebecca have  three children: David Jr., D.J., Raquel and Rebecca's parents also live with the family.