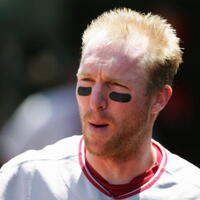 Darin Erstad Net Worth: Darin Erstad is an American retired professional baseball player who has a net worth of $24 million. Darin Erstad was born in Jamestown, North Dakota in June 1974. He was a first baseman, center fielder, and left fielder who batted and threw left handed. He played American Legion baseball and was named AP North Dakota Athlete of the Year in 1992 while playing for Jamestown High School. He played at the University of Nebraska-Lincoln and was a finalist for the 1995 Golden Spikes Award. Darin also was a punter for the Cornhuskers football team that won the 1994 National Championship. He was selected as the #1 overall pick in the 1995 Major League Baseball Draft by the California Angels. Erstad made his MLB debut for the Angels in 1996 and played with them through the 2006 season. He joined the Chicago White Sox in 2007 and signed a contract for $750,000. Erstad finished his playing career with the Houston Astros from 2008 to 2009. During his career he was a two time MLB All-Star in 1998 and 2000. He won a World Series Championship with the Angels in 2002. Erstad also won three Gold Glove Awards and a Silver Slugger Award. He became a volunteer coach for the Nebraska baseball team in 2010. He then became the team's hitting coach before becoming their head baseball coach.