Dan Uggla Net Worth: Dan Uggla is an American professional baseball player who has a net worth of $34 million. Dan Uggla was born in Louisville, Kentucky, in 1980, and played college baseball at the University of Memphis. The Arizona Diamondbacks drafted Uggla during the eleventh round of the 2001 MLB Draft.

He went through the team's farm system for several years before becoming of the Rule 5 Draft and being selected by the Florida Marlins. He made his MLB debut shortly after on April 3, 2006. Uggla played with the Marlins until 2010 when he turned down a four-year, $48 million contract offer from the team and was promptly traded to the Atlanta Braves. Atlanta signed him to a five-year, $62 million deal in early 2011. He played with the Braves until they released him during the summer of 2014; Uggla landed a minor-league deal with the San Francisco Giants soon after. He played in a handful of MLB games with the Giants, but refused to return to the minor leagues and became a free agent. Uggla has won one Silver Slugger Award in 2010 and is a three-time MLB All-Star (2006, 2008, 2012). Through the middle of July 2014, he has a career batting average of .244, 1,127 hits, 233 home runs, 690 runs batted in, and an on-base percentage of .337. 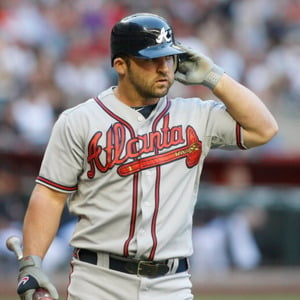