How much is Daisuke Matsuzaka Worth?

Daisuke Matsuzaka Net Worth and salary: Daisuke Matsuzaka is a Japanese professional baseball player who has a net worth of $30 million. Born in Aomori, Aomori Prefecture, Japan, in 1980, Daisuke Matsuzaka made his professional playing debut with the NPB's Seibu Lions on April 7, 1999. He played with the Lions until 2006, putting together a 108-60 win-loss record, a 2.95 earned run average, and 1,355 strikeouts during his career. The right-handed pitcher made his Major League Baseball debut with the Boston Red Sox on April 5, 2007. He played with the Red Sox until 2012 before landing with the New York Mets from 2013 until 2014. As of the end of the 2014 season, Matsuzaka is currently a free agent. His MLB statistics through the end of the season include a 56-43 win-loss record, a 4.45 earned run average, 720 strikeouts, and one save. He has won dozens of honors in career, most with the NPB, including Pacific League Rookie of the Year, the Eiji Sawamura Award, the Mitsui Golden Glove Award (seven times), and the Japan Series championship. Matsuzaka was a seven-time NPB All-Star. In Major League Baseball, he was part of the Red Sox's 2007 World Series championship. Matsuzaka has played for the Japan national baseball team, winning two World Baseball Classics. Dice-K is married to journalist Tomoyo Shibata, and together they have two children. 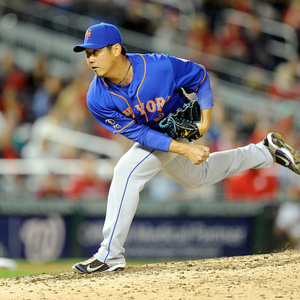