Craig Biggio net worth and salary: Craig Biggio is a former MLB player who has a net worth of $50 million. Craig Biggio had a career that spanned 20 years with the Houston Astros as a professional baseball player from 1988 to 2007. He holds numerous titles such as seven-time MLB All-Star, four Gold Glove Awards and five Silver Slugger Awards. This second baseman, catcher and outfielder was a force to reckon with. He holds the rank of 21st all-time 3,060 career hits, as well as the ninth players in the 3,000 hits club to get all his hits with the same team. Biggio graduated from Kings Park High School on Long Island, New York. After being awarded the Hansen Award as the best football player in Suffolk County in 1983, he turned down numerous football scholarships for the opportunity to play the game he has so much passion for, baseball at Seton Hall University. At Seton Hall University he honed his skills as an All-American baseball player alongside teammates and future Major League Baseball stars John Valentin and Mo Vaughn. He got drafted in 1987 by the Houston Astros in the first round. In his first season in 1989, Biggio became the Astros' starting catcher. In that year he won what was to be his first out of five Silver Slugger awards.

In spring training 1992, Astros management was able to convince Biggio whom had made the National League All-Star team as a catcher in 1991 to switch over to second base. Biggio became the first player in baseball history in 1992 to be an All-Star at both catcher and second base. It is a rare accomplishment for a catcher to transition successfully to middle infielder.
Biggio became the 27th player in the history of baseball and the first player in Astros history to join the 3,000 hit club, on June 28th, 2007, with a single against Colorado Rockies. Ending an impressive career in 5th place on the all-time list, Biggio til date holds the record for most doubles by a right-handed hitter. He remains the only player in baseball history with 3,000 hits, 400 stolen bases, 600 doubles and 250 home runs. In addition to, possessing the record for most times hit by a pitch in a career with a whopping 285 times. 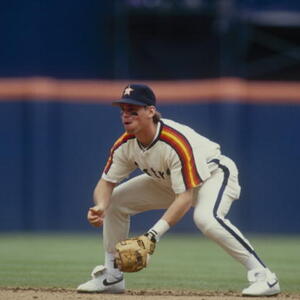