Corey Kluber Net Worth and salary: Corey Kluber is an American professional baseball player who has a net worth of $12 million. Corey Kluber was born in Birmingham, Alabama in April 1986. Kluber is a pitcher who bats and throws right handed. He played college baseball at Stetson University. In 2007 Kluber was the A-Sun Pitcher of the Year and part of the American Baseball Coaches Association All-Atlantic Region Second Team.

He was drafted in the fourth round of the 2007 MLB Draft by the San Diego Padres. He was named Pitcher of the Week in the Midwest League, California League, and Texas League. Kluber was traded to the Cleveland Indians in July 2010. Kluber made his major leagued debut for the Indians in September 2011 and has played there his entire career. In June 2013 he threw eight shutout innings against the Washington Nationals. In September 2014 Kluber became the first pitcher to strike out 14 batters in consecutive starts since Randy Johnson did so in 2004. As of September 2014 he has 30 wins and over 450 strikeouts with an ERA of 3.40. 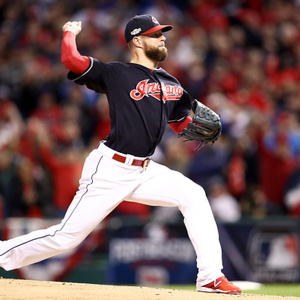