Coco Crisp Net Worth and salary: Coco Crisp is an American professional baseball player who has a net worth of $30 million. Born Covelli Loyce Crisp in Los Angeles, California, in 1979, Coco Crisp made his Major League Baseball debut on August 15, 2002 for the Cleveland Indians. Crisp played with the Indians in 2005 before joining the Boston Red Sox from 2006 until 2008. He was a member of the Kansas City Royals in 2009 and has been with the Oakland Athletics since 2010. As of the end of the 2014 season, Crisp remains with the A's. He was the American League stolen bases co-champion in 2011 and won one World Series championship with the Red Sox in 2007. Through the 2014 season, Crisp has amassed a 2.70 career batting average to go along with 1,447 hits, 117 home runs, 578 runs batted in, 297 stolen bases, and an on base percentage of .330. Crisp is a switch-batter who throws right-handed from the center field position. Crisp has four children with his wife: three sons and one daughter. Coco earned his nickname as a child when his siblings teased him for resembling one of the animated characters on the cereal box for Cocoa Krispies, though the name didn't stick until Crisp made his way into MLB's farm system. He legally changed his name during the spring of 2013. In total, Coco earned $75 million in salary alone during his career. In June 2018, he listed a mansion in Rancho Mirage, California for $9.5 million. He bought the property in 2013 for $7 million. 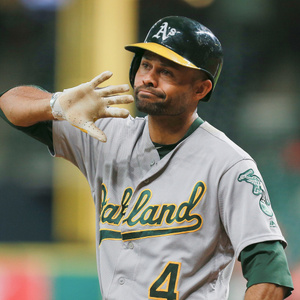