Chuck Finley Net Worth: Chuck Finley is a retired American professional baseball player who has a net worth of $28 million. Born in Monroe, Louisiana, in 1962, Chuck Finley made his Major League Baseball debut on May 29, 1986 for the California Angels. He played with the California and later the Anaheim Angles from 1986 until 1999.

Finley, a left-handed pitcher, went on to play with the Cleveland Indians from 2000 until 2002 and the St. Louis Cardinals in 2002. His last pro appearance came on September 28, 2002 for St. Louis. Finley amassed a career win-loss record of 200 wins and 173 losses to go along with a 3.85 earned run average and 2,610 strikeouts. He was a five-time MLB All-Star in 1989, 1990, 1995, 1996, and 2000. Finley was considered a rare left-handed power pitcher in the same vein as fellow MLB great Randy Johnson. Finley inspired the alias of "Burn Notice" character Sam Axe. He was previously married to actress Tawny Kitaen from 1997 until 2002, though that union ended in divorce when Kitaen was alleged to have assaulted Finley with a stiletto. She later accused her ex-husband of using steroids to get an edge in baseball, which he denied. The couple has two children together. 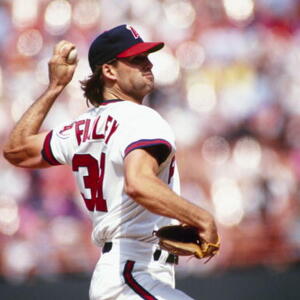