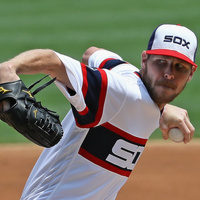 Chris Sale Net Worth: Chris Sale is an American professional baseball player who has a net worth of $24 million. Chris Sale was born in Lakeland, Florida in March 1989. Sale is a pitcher who bats and throws left handed. He was drafted in the 21st round of the 2007 MLB Draft by the Colorado Rockies but chose to attend Florida Gulf Coast University instead. For the 2010 season he received conference and national Pitcher of the Year honors and posted an 11-0 record. He pitched for the Cape Cod Baseball League's Yarmouth-Dennis Red Sox in 2009 and was named MVP of the all-star game. He was drafted again at the 2010 MLB Draft #13 by the Chicago White Sox and made his professional debut the same year. Sale has pitched for the White Sox for his entire MLB career. He has been a three time All-Star from 2012 to 2014 and was named American League Pitcher of the Month in May 2012. In 2013 he signed a five year deal worth $32 million with the White Sox.