Chone Figgins Net Worth: Chone Figgins is an American professional baseball player who has a net worth of $25 million. Chone Figgins was born in Leary, Georgia, in 1978. The Colorado Rockies drafted him straight out of Brandon High School during the fourth round of the 1997 Major League Baseball Draft.

Figgins was traded to the Anaheim Angels in 2001 and made his debut with the club on August 25, 2002. He played with the Los Angeles Angels of Anaheim franchise from 2002 until 2009 before playing for the Seattle Mariners from 2010 until 2012 and the Los Angeles Dodgers in 2014. At one point during his stint with the Angels, Figgins landed a three-year, $10.5 million contract to remain with the team. As of the fall of 2014, Figgins is a free agent heading into the 2015 season. As of the end of the 2012 season, he has a career batting average of .277 to go along with 35 home runs, 402 runs batted in, 1,285 hits, and 337 stolen bases. The right-handed utility player has played third base and various outfield positions. He was part of the Angels' 2002 World Series championship-winning team. He earned his first, and, to date, only All-Star berth in 2009. He led Major League Baseball in stolen bases during the 2005 season. 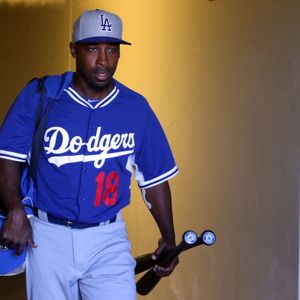