What is Chipper Jones' net worth and salary?

Chipper Jones is a retired American professional baseball player who has a net worth of $90 million. Chipper served as the primary third baseman for the Atlanta Braves from 1995 to 2012. An eight-time All-Star, he won the 1999 National League MVP Award and two Silver Slugger Awards. Among his other achievements, Jones has the most career RBIs of any third baseman. He holds the record for most RBIs for a third baseman and is second on the all-time switch hitters RBI list. His #10 was retired by the Atlanta Braves and was inducted into the team's Hall of Fame.

Chipper Jones was born as Larry Wayne Jones Jr. in 1972 in DeLand, Florida. His father, Larry Sr., was a teacher and coach at T. DeWitt Taylor High School, where Jones would later play baseball as a freshman. As a sophomore, he went to the Bolles School, where he notched a 6-3 record with 87 strikeouts and a .391 batting average. In 1989, he played both baseball and football, winning First Team All-State honors for both sports, and winning a state championship in the former. Subsequently, Jones won the Gatorade Circle of Champions Florida Baseball Player of the Year, the Regional Baseball Player of the Year, and came in second for National Player of the Year. After graduating high school, he accepted a baseball scholarship at the University of Miami.

In the 1990 MLB draft, Jones was the first overall pick by the Atlanta Braves. The following year, he played with Atlanta's minor league affiliate the Macon Braves, and then moved up to the Durham Bulls and the Greenville Braves. After a successful season, he played 139 games with the Richmond Braves.

With the Atlanta Braves, Jones debuted in September of 1993 as the league's youngest player. Soon after, during spring training, a torn ACL left Jones on the disabled list for the whole season. However, he came roaring back in 1995, leading all MLB rookies in games played, games started, plate appearances, at bats, RBIs, and runs scored. Moreover, he played in the 1995 World Series, helping the Braves win against the Cleveland Indians in six games. Jones was back in the World Series in 1996, although this time the team lost to the New York Yankees.

The year 1999 was a major one for Jones; he hit over .300, slugged over 40 home runs, notched over 100 RBIs and runs scored, and stole 25 bases. The Braves swept the National League East series at Turner Field, where Jones hit four home runs and drove in seven of 13 runs scored by the team. The Braves once again made it to the World Series, but were swept by the Yankees. For his season, Jones won the National League MVP award.

In 2000, Jones signed a six-year, $90 million deal with the Braves. For the following season, he batted .330, and led the league with a .349 road batting average. In 2002 and 2003, Jones briefly tried his hand as a left fielder, but moved back to third base after a hamstring pull. In August of 2004, he reached a major milestone when he hit his 300th career home run in a victory against the San Diego Padres. More milestones came in the 2006 season, when Jones became both the all-time RBI leader and hits leader for the Braves. Also that year, he had his first career three-home-run game.

In 2009, Jones signed a three-year, $42 million contract extension with the Braves. That year, Sporting News ranked him as the tenth greatest current baseball player. For his final season in 2012, Jones went out with a bang. After being activated from the disabled list, he went 2-4 with a single and a two-run home run to give the Braves their first season win. Later in the month, he helped the team defeat the Los Angeles Dodgers, and made a game-winning home run in the 11th inning in a game against the Philadelphia Phillies. In June, Jones hit his 460th home run, and in July, was named to the NL All-Star team. Ultimately, he finished his career with the most RBIs of any third baseman. 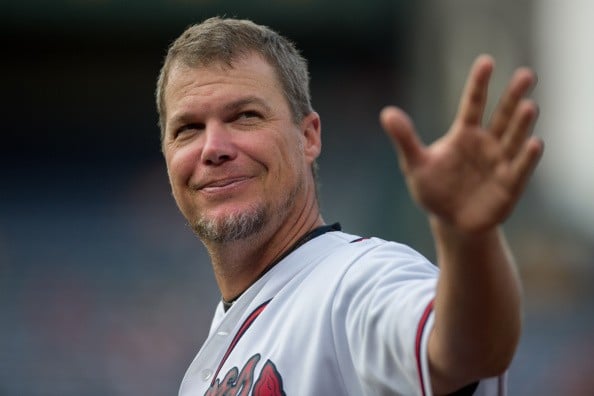 Jones garnered recognition in 2014, when he rescued his former Atlanta Braves teammate Freddie Freeman from a traffic jam during a winter storm. Pulling up on his ATV, he took Freeman out of his car to safety. To honor the deed, the Braves announced a "Chipper Rescues Freddie" bobblehead night for the 2016 season.

While playing for the Macon Braves early in his professional career, Jones met Karin Fulford. The two married in 1992. While together, Jones carried out an 18-month affair with a Hooters waitress, with whom he had a son, Matthew, in 1998. As a result, Jones and Fulford divorced in 2000.

Jones subsequently wed Sharon Logonov, with whom he had three more sons: Trey, Tristen, and Shea. The pair divorced in 2012.

Next, Jones began dating Playboy model Taylor Higgins. They married in 2015. Together, they have two sons, Cutler and Cooper.

Jones is known to enjoy deer hunting. He was a co-owner of the Outdoor Channel hunting show "Buck Commander," and, along with longtime friend Matt Duff, co-owns and co-hosts the Sportsman Channel television show "Major League Bowhunter."

In 2018 Chipper paid $9.5 million for a 37-acre estate 20 minutes outside of Atlanta. The property's 23,00 square-foot mansion features 8 bedrooms, sauna, wine room and much more. The estate features stables, an Olympic-sized swimming pool, guest houses and a nine-car garage. 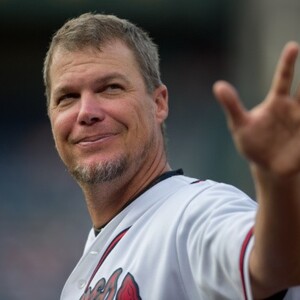