CC Sabathia net worth: CC Sabathia is an American baseball pitcher who has a net worth of $80 million. The 6-foot-7 Sabathia has played for the New York Yankees of Major League Baseball (MLB) since December 2008, when he signed the seven-year contract, worth $161 million. Upon signing with the Yankees, he became the highest-paid pitcher in MLB history. The first seven and a half seasons of his career, CC Sabathia played with the Cleveland Indians, where he earned the 2007 Cy Young Award. Then the second half of the 2008 MLB season, he spent playing with the Milwaukee Brewers, leading the team to the Wild Card, which was their first playoff appearance in 26 years. Overall, this left handed pitcher with his trademark hat cocked slightly to the side is considered as one of the most durable pitchers in MLB history, having accumulated an average of more than 200 innings pitched per season throughout his career. However, not all of his net worth comes from contract with the Yankees alone. CC Sabathia also brings in almost $1 million annually from sponsors like Subway, Pepsi, EA Sports and Nike's Jordan Brand. Off the field, he is a man of family, faith and philanthropy. A father of four, he has supported various charity actions in Vallejo, California and the greater New York area, like providing Thanksgiving and Christmas dinners to those in need, work with the Boys & Girls Club, and Strikeouts For Troops where he assists wounded war heroes and their families. 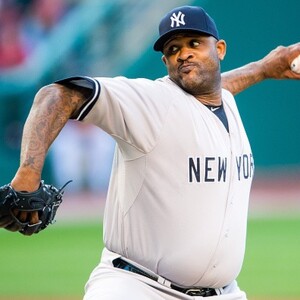