Carlos Zambrano Net Worth and salary: Carlos Zambrano is a Venezuelan professional baseball player who has a net worth of $60 million dollars. Born in 1981 in Puerto Cabello, Venezuela, Carlos Zambrano began his Major League Baseball career with the Chicago Cubs, signing as a free agent in 1997. He made his big league debut on August 20, 2001.

Zambrano became a regular starter with the Cubs in 2003, compiling a 13-11 record with a 3.11 ERA and 168 strikeouts. Throughout his career, he's amassed a 132-91 record with 1,637 strikeouts. Zambrano is considered to be one of the better-hitting pitchers in MLB. He is batting .238 for his career, knocking in 71 runs and hitting 24 homeruns. He is a three-time All-Star with the Cubs, a three-time Silver Slugger, and led the National League in wins in 2006, becoming the first Venezuelan to ever do so. Zambrano recorded his first career no-hitter against the Houston Astros on September 14, 2008. He was traded to the Miami Marlins in 2012, but put together a disappointing campaign with a 7-10 record and 4.94 ERA. Zambrano was released into free agency and landed a minor league deal with the Philadelphia Phillies. That deal was terminated in July, and Zambrano remains a free agent. 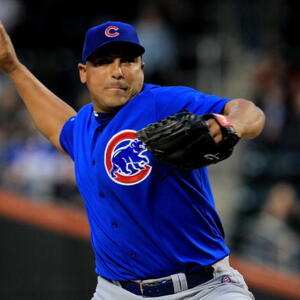