Carlos Ruiz net worth: Carlos Ruiz is a Panamanian professional baseball player who has a net worth of $18 million. Carlos Ruiz was born in David, Chiriqui, Panama in January 1979. He is a catcher who bats and throws right handed. Ruiz signed with the Philadelphia Phillies and made his Major League Baseball debut in 2006 for the Phillies where he played until 2016.

He won a World Series championship in 2008 with Philadelphia and was named an All-Star in 2012. Ruiz co-holds a record for catching four no-hitters which is tied with Jason Varitek. He was suspended for 25 games in 2013 for using Adderall. Ruiz was traded to the Los Angeles Dodgers in 2016. He has 900 career hits with 68 home runs and 401 runs batted in. 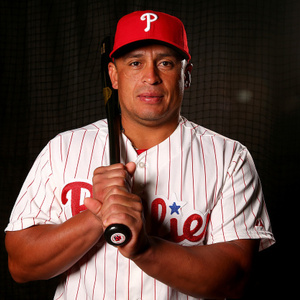