Carlos Gonzalez Net Worth: Carlos Gonzalez is a Venezuelan professional baseball player who has a net worth of $36 million. Born in 1985 in Maracaibo, Venezuela, Carlos Gonzalez was signed into Major League Baseball by the Arizona Diamondbacks during the summer of 2002. He didn't make his MLB debut, however, until May 30, 2008, with the Oakland Athletics.

He was traded about six months later to the Colorado Rockies along with several other teammates in exchange for Matt Holliday. He has remained with the Rockies organization ever since, though he spent most of the balance of the 2008 season with the club's Triple-A affiliate. In early 2011, he landed a seven-year, $80.5 million contract extension with Colorado. He has gone on to record a career batting average of .294, 828 hits, 136 home runs, 457 runs batted in, 438 runs scored, and 110 stolen bases as of midway through August of 2014. Gonzalez is a two-time MLB All-Star, earning the honor in 2012 and again in 2013. He was the National League batting champion in 2010 and has won three Gold Glove Awards in 2010, 2012, and 2013. In 2010, Gonzalez also earned the National League Silver Slugger Award. Gonzalez has been married to his wife, fellow Venezuelan Indonesia Riera, since the fall of 2012. 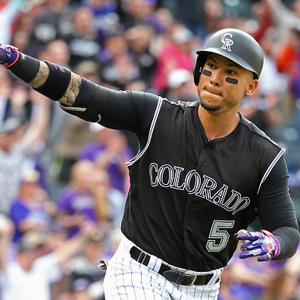