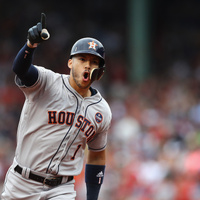 Carlos Correa net worth and salary: Carlos Correa is a Puerto Rican professional baseball player who has a net worth of $50 million. Carlos Correa was born in Ponce, Puerto Rico in September 1994. He is a shortstop who bats and throws right handed. After playing in Puerto Rico, he was the #1 overall pick in the 2012 Major League Baseball draft at just 17 years old when the Houston Astros selected him. Correa made his MLB debut in June 2015 for the Astros. That year he was named American League Rookie of the Year. Carlos Correa won the World Series with Houston in 2017. In the same year he was an All-Star and was selected to the World Baseball Classic All-Tournament Team representing Puerto Rico. Correa signed a deal with the Astros in 2012 which included a $4.8 million signing bonus. He was also named American League Player of the Month in May 2017.

Carlos became a free agent upon the conclusion of the 2022 season. Before the season began he rejected a $105 million contract from the Twins, who had been paying him $35 million per year, to test the open market. On December 14, 2022 it was rumored that Carlos was on the verge of signing a 13-year, $350 million mega contract with the Giants. A week later the story changed. On December 21, 2022 it was revealed that Carlos never officially signed with the Giants and instead opted to sign a 12-year $315 million contract with the Mets.