Carlos Beltran net worth and salary: Carlos Beltran is a Puerto-Rican born professional baseball player who has a net worth of $80 million. Beltran was born in Manati, Puerto Rico on April 24, 1977. He attended Fernando Callejo High School where he played both volleyball and baseball. At his father's urging, Carlos eventually gave up volleyball to concentrate solely on baseball.

He was drafted onto the Kansas City Royals' rookie team in 1995 and four years later he was the team's starting center fielder and leadoff hitter. He soon moved up to the third batting position and was voted American League Rookie of the Year. During his career to date, Carlos has been an 8 time All-Star, three time Gold Glove Award winner and a two time Silver Slugger Award winner. He's also a member of the 30-30 club and the 300-300 club. As of this writing, Carlos has earned more than $160 million in salary during his baseball career. His highest salary to date is the $19.4 million he earned from the New York Mets during the 2009-2010 season. In 2005 Beltran was seriously injured in a collision with outfielder Mike Cameron, when they both went for a ball in shallow right center field. The head on collision caused Beltran to suffer with vertigo for a while. Cameron suffered a concussion, broken cheekbones and temporary loss of vision. Beltran is the founder of the Carlos Beltran Baseball Academy in the town of Florida, Puerto Rico. The teachers at the Academy are former MBL players. Beltran resides in Port Washinton, New York and Manati, Puerto Rico. He is the cousin of the San Diego Padres center fielder, Reymond Fuentes. 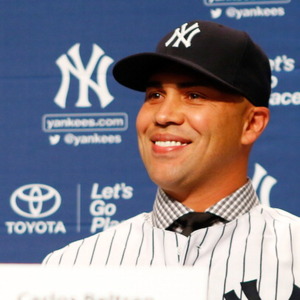