What is Carl Crawford's Net Worth and Salary?

Carl Crawford is a retired American professional baseball player who has a net worth of $65 million. Carl Crawford, aka "The Perfect Storm," was known for his days with the Tampa Bay Rays in which he was regarded as one of the best baserunners in all of baseball. During his tenure with the team, he led the American League in stolen bases and triples four times each.

Carl Demonte Crawford was born on August 5, 1981, in Houston, Texas. He attended Jefferson Davis High School where he lettered in baseball, football, and basketball. His senior year of high school, Carl batted .638. He was offered a scholarship to play point guard for UCLA basketball, as well as to play football as an option quarterback for USC, Oklahoma, Florida, Nebraska, and Tulsa. After signing a letter of intent to play football for Nebraska, Crawford changed his mind and decided to focus on a career in baseball.

Carl Crawford was drafted by the Tampa Bay Devil Rays with the 52nd overall selection in the second round of the 1999 MLB Draft. He was named the International League Rookie of the Year in the minors with the AAA Durham Bulls before making his major league debut with the Devil Rays in 2002. He was named the team's Most Outstanding Rookie by the Tampa Bay chapter of the Baseball Writers' Association of America. He is best known for his nine years with the Rays where he made a name for himself as an excellent baserunner, fielder, and hitter. While with the team, Crawford led the American League in stolen bases four times (2003, 2004, 2006, 2007), was a four-time All-Star (2004, 2007, 2009, 2010), and a Silver Slugger Award winner and Gold Glove Award winner in 2010. He also tied the MLB record with six stolen bases in a single game and was named the All-Star Game MVP in 2009.

In December of 2010, Carl Crawford signed a megadeal to join the Boston Red Sox as a free agent. The next year, he was traded to the Los Angeles Dodgers after undergoing reconstructive Tommy John surgery to repair his left elbow. He had some success with the Dodgers but also battled various injuries over his time with the team. In June of 2016, Crawford was released by Los Angeles, and he declined offers to try out for any other major league team and retired.

Over his MLB career, Carl Crawford posted a .290 batting average to go along with 136 home runs, 766 runs batted in, and 480 stolen bases. He finished his career with a .989 fielding percentage playing in left field and center field. Crawford also played internationally for the United States and won a silver medal in the 2001 Baseball World Cup. 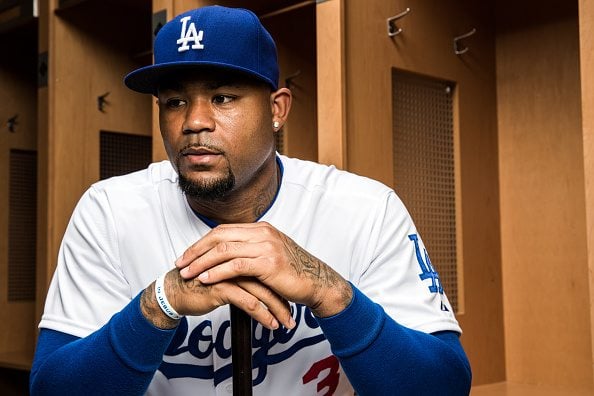 In March 2016 the Dodgers benched Carl due to poor performance. At this point, Carl was earning $20 million per year to SIT ON THE BENCH.

Across 16 seasons in the big leagues, Carl Crawford earned more than $179 million in salary alone.

Carl Crawford announced his engagement to Evelyn Lozada in December of 2013, and they have a son together. Carl also has two children from a previous relationship.

Crawford is the CEO of 1501 Certified Entertainment, an independent record label based out of Houston.