Bryce Harper Net Worth and Salary: Bryce Harper is an American professional baseball player who has a net worth of $70 million. Bryce started his career with the Washington Nationals before signing with the Phillies after 2018. Described as a "five-tool player," Harper made his MLB debut when he was 19 years old. He later became the youngest-ever player to be selected for an All-Star Game.

The recipient of a Rookie of the Year Award in 2012, Bryce is known for leading the league for home runs on more than one occasion. He then won the MVP Award at the age of 23 in 2015 – again becoming the youngest player to receive such an honor. After becoming a free agent in 2018, Bryce signed a staggering $330-million contract with the Phillies, which broke several records.

Early Life: Bryce Aaron Max Harper was born on October 16th of 1992 in Las Vegas, Nevada. Harper is a member of The Church of Jesus Christ of Latter-day Saints. He is said to have developed his strong work ethic as a result of his father's influence. His brother also played baseball within the Washington Nationals organization. To this day, Harper abstains from alcohol because of his religion.

Bryce attended high school in Las Vegas and graduated early. This allowed him to start his professional baseball career early when the 2010 MLB Draft rolled around. Before then, Harper attended the College of Southern Nevada at the age of 17 and played as a catcher. During his college career, he hit 31 home runs, shattering the school's previous record of 12 per season. He ended his amateur career with a suspension after disputing an umpire's call.

Career: At the 2010 draft, Bryce Harper was selected by the Washington Nationals. He was told to play outfield despite being a catcher, as the Nationals wanted him to become a more well-rounded player before making his MLB debut. Initially, he signed a five-year, $9.9-million contract, which included a $6.25 million signing bonus. In addition, the Nationals agreed to pay for eight semesters' worth of college tuition.

After a slow start to his minor career, Harper was told by a doctor that he had "some of the worst eyes [the doctor] had ever seen," and he was given contact lenses. His batting average rose dramatically, and he hit .480 during the next period. After a hamstring injury slowed his progress once again, the Nationals finally promoted Harper to the major leagues in 2012. He made his debut against the L.A. Dodgers and proved his potential by stealing home plate – becoming the first teenager to accomplish this since 1964. At the age of 19, Harper hit his first home run against the San Diego Padres. This was also the first time a teen had hit a home run since 1998.

After a slow period where his batting average fell to .176, Harper continued to play well and his batting average improved. In 2015, he hit the longest home run of his MLB career – a 461-foot hit. That year, he was also named Most Valuable Player by unanimous decision. By 2018, Harper and the Nationals agreed to a one-year, $21,625-million contract to avoid arbitration. That year, he attacked San Francisco Giants pitcher Hunter Strickland after the pitcher hit him with the ball. This sparked a massive brawl that caused serious injuries for various team members, and Harper was suspended for four games.

After becoming a free agent, Bryce signed a lucrative, record-breaking deal with the Philadelphia Phillies. His career with the Phillies began in earnest in 2019, While Harper played well, he was forced to watch as his former team, the Washington Nationals, won the World Series. In contrast, the Phillies didn't even make the playoffs. The 2020 season was marred by the Covid-19 pandemic, and it was suspended indefinitely at one point. Despite this, the MLB later settled on a revised 60-game season. Harper finished with 13 home runs and 49 walks.

Brand Endorsements: Bryce Harper has been featured many times in various forms of ESPN media. He also has a sponsorship deal with a supplement company called MusclePharm. He also has an endorsement deal with Blind Barber, a company that owns a chain of barbershops and sells various hair products.

Relationships: After becoming engaged to his girlfriend Kayla Varner in 2014, Harper and his fiancee did not get married at the planned time. It was later announced that they had broken up. However, they reconciled in 2016 and got married that year. In 2019, the couple welcomed their first child into the world. They welcomed a second child in November 2020.

Contract Highlights: On February 28 of 2019, Bryce Harper signed a record-setting, 13-year, $330-million contract with the Phillies. It set the record for the largest contract in sports history – but the per-season average pay of $25 million isn't enough to be one of the top-10 largest in Major League Baseball history. By the time this 13-year deal is up, Bryce will have earned $400 million in MLB salary alone. Between June 2018 and June 2019, Bryce Harper earned $45 million from his various endeavors. That was enough to make him one of the highest-paid athletes on the planet.

Real Estate: In 2016, it was reported that Harper and his fiancee Kayla Varner purchased a $2.7-million mansion in Nevada. Spanning 7,400 square feet, the property features outdoor amenities such as a pool, a waterfall, and incredible views that reach down to the Las Vegas Strip. The property is in a gated community, and it also boasts five bedrooms and a games room. 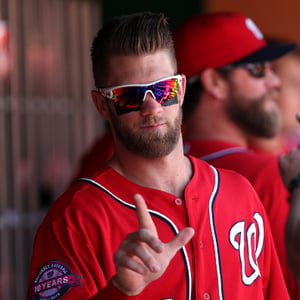