Bronson Arroyo Net Worth: Bronson Arroyo is an American professional baseball player who has a net worth of $33 million. Bronson Arroyo was born in 1977 in Key West, Florida. The Pittsburgh Pirates drafted him during the 1995 MLB Draft in the third round. He made his professional debut on June 12, 2000 with the Pirates and played there until he joined the Boston Red Sox from 2003 until 2005.

Arroyo also pitched for the Cincinnati Reds from 2006 until 2013 before he became part of the Arizona Diamondbacks. As of the fall of 2014, Arroyo continues to pitch in the desert. He earned his first, and, to date, only All-Star honor during the 2006 season. He won a Gold Glove Award in 2010 and the Joe Nuxhall Good Guy Award in 2006 and again in 2009. The right-handed pitcher was part of the Red Sox team that won the World Series in 2004. Through the middle of July 2014, Arroyo has put together a 145-131 career win-loss record to go along with a 4.19 earned run average and 1,526 strikeouts. Arroyo is also pursuing a music career and released his first album, "Covering the Bases", in 2005. Though he was not named in the infamous Mitchell Report, Arroyo had said he wouldn't be surprised if he was among the more than 100 MLB players to fail a drug test in 2003. 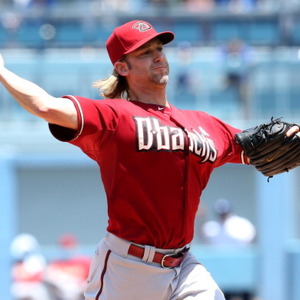