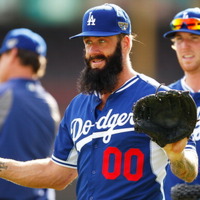 Brian Wilson Net Worth and salary: Brian Wilson is an American professional baseball player who has a net worth of $16 million. Brian Wilson was born in 1982 in Winchester, Massachusetts. He made his Major League Baseball debut on April 23, 2006 with the San Francisco Giants after playing college baseball at Louisiana State University. Wilson, a right-handed relief pitcher, is best known for his cutter, slider, two-seam fastball, and four-seam fastball. He played with the Giants from 2006 until 2012 before joining the Los Angeles Dodgers in 2013. Wilson remained on the Dodgers' roster until 2015 when he was released as a free agent. He won one World Series championship in his career in 2010 as a member of the Giants. That year, he won the National League saves crown. Wilson is a three-time MLB All-Star, earning the honors in 2008, 2010, and 2011. Through the end of the 2014 season, Wilson has amassed a 24-25 career win-loss record to go along with an earned run average of 3.30, 407 strikeouts, and close to 175 saves. Wilson is famed for his giant black beard that started when the Giants made their run to the postseason in 2010. He has attracted quite a bit of media attention, appearing on several shows, including "The Tonight Show with Jay Lenzo" and a handful of commercials. During his carer, Brian Wilson earned $40 million in salary alone.