Brian Roberts Net Worth: Brian Roberts is an American professional baseball player who has a net worth of $27 million. Born in 1977 in Durham, North Carolina, Brian Roberts began playing baseball with the University of North Carolina Tarheels. He took college baseball by storm, earning ACC Player of the Year honors at one point during his career.

He later transferred to the University of South Carolina, where he continued to succeed. The Baltimore Orioles took note of his success and drafted him during the first round of the 1999 MLB Draft. Roberts made his professional debut on June 14, 2001 with the Orioles. He played with the team for more than a decade before he scored a free agent contract with the New York Yankees for one-year and $2 million. Through July of 2014, Roberts amassed a .277 career batting average to go along with 1,520 hits, 97 home runs, 541 runs batted in, 366 doubles, and 285 stolen bases. The right-handed second baseman is a free agent heading into the 2015 regular season as of the fall of 2014. Roberts is a two-time MLB All-Star (2005, 2007) and led the American League in doubles in 2004 and 2009 and co-lead the AL in stolen bases in 2007. Roberts was a key figure in the MLB steroid scandal and was accused of taking steroids by a former player. He later admitted to taking the drugs once. Roberts has one child with his wife, Diana Chiafair. 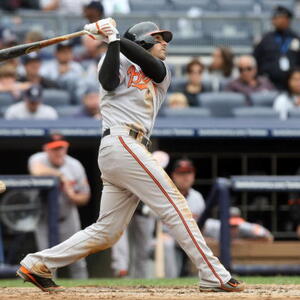