In February 1998, he was named Senior Vice-President and General Manager, succeeding Bob Watson. On September 30, 2008, he signed a new 3-year contract to stay with the Yankees through the 2011 season. Following that season, when the Yankees failed to make the playoffs, Cashman signed CC Sabathia, AJ Burnett, and Mark Teixeira to long-term free agent contracts. These three players went on to play a huge role in the Yankees season, culminating with a victory in the 2009 World Series. The Yankees re-signed Cashman to a three-year deal in November 2011. During 2013, Cashman was involved in a "tweet" exchange when player Alex Rodriguez composed a tweet (on Twitter) claiming he had been cleared by his doctors to play, after his hip surgery. Cashman was not pleased about the tweet, claiming the doctors had not given clearance for Rodriguez to play. Cashman's baseball career awards include being selected as Major League Baseball Executive of the Year for 2009 by the Boston Chapter of the Baseball Writers' Association of America and being named to Crain's New York Business 40 under 40 list for 1999. He also played a key role in the development of the video game MLB Front Office Manager.
Brian Cashman Salary
What is Brian Cashman's salary? $3 million 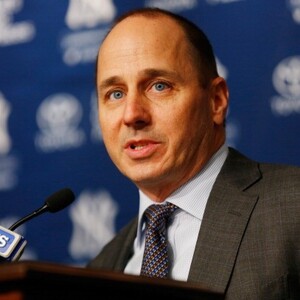