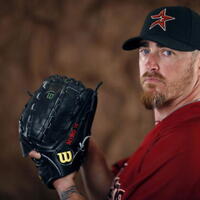 Brett Myers is an American professional baseball player who has a net worth of $22 million. Born on August 17, 1980 in Jacksonville, Florida, Myers began his love for sports as an amateur boxer and began playing baseball in high school. Best known for his pitching, Myers has finished out contracts with the Philadelphia Phillies, the Houston Astros, the Chicago White Sox, and most recently played for the Cleveland Indians. Myers debuted for the Philadelphia Phillies on July 24, 2002. He maintains a win-loss record of 97-96, an earned run average of 4.25, 50 saves and 1,379 strikeouts. He won a World Series championship in 2008 with the Phillies. In 2009, he was placed on the disabled list for a torn labrum in the hip and eye surgery. He claimed to have gotten hit in the face while playing catch with his daughter but later claimed that he had fallen out of his truck. Despite his fame in Major League Baseball, Myers is also notorious for his run-in with domestic violence. He was forced to take a leave of absence from the Phillies in 2006 due to an altercation in Boston where he was seen punching his wife during an argument. Kim Myers refused to have him prosecuted, and the case was dismissed.