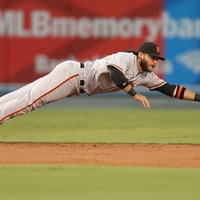 Brandon Crawford net worth: Brandon Crawford is an American professional baseball player who has a net worth of $1 million. Brandon Crawford was born in Mountain View, California in January 1987. He is a short stop he bats left and throws right handed. He played baseball and basketball at Foothill High School and was also the starting quarterback for the football team. He attended the University of California, Los Angeles and led the team to three consecutive NCAA Regionals. He was the team's MVP in 2006 and 2007 and was named to the All-Pac-10 conference team in 2007. Crawford also played on the United States national team that won the World Championship at the 2005 International University Sports Federation. Crawford was drafted in the 4th round of the 2008 Major League Baseball Draft by the San Francisco Giants. He played in the minor leagues before making his MLB debut with San Francisco in 2011. Crawford has spent his entire career with the Giants. Brandon won a World Series Championship with the Giants in 2012. He holds MLB records for being the first short stop to hit a postseason grand slam and for hitting a grand slam in his MLB debut.