Brad Radke Net Worth: Brad Radke is a former American professional baseball player who has a net worth of $26 million. Brad Radke was born in 1972 in Eau Claire, Wisconsin, and was drafted during the eighth round of the 1991 amateur draft by the Minnesota Twins. He made his pro debut four years later with the team on April 29, 1995.

He played every game of his career with the Twins from 1995 until 2006, making his final pro appearance on October 6, 2006. He officially retired a few months later on December 19. The right-handed pitcher and batter amassed a 148-139 career win-loss record. He has a 4.22 earned run average and 1,467 strikeouts. Radke earned MLB All-Star honors in 1998. He was considered one of the most reliable pitchers for the Twins during the late '90s in the organization. Though he played in the American League and wasn't frequently called upon to bat thanks to the designated hitter position, Radke finished his career with three hits, no walks, five sacrifice hits, and a .130 batting average. He went two-and-three overall during postseason play. Radke was a Cy Young Award finalist in 1997, finishing in third place behind Roger Clemens and Randy Johnson. 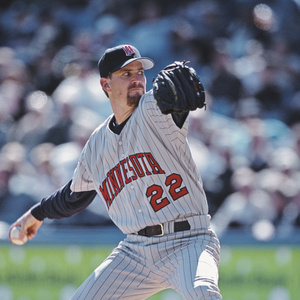