Brad Penny is an American professional baseball player who has a net worth of $20 million. Best known for his pitching, Penny was born on May 24, 1978 in Blackwell, Oklahoma. Penny has played for the Florida Marlins, Los Angeles Dodgers, Boston Red Sox, San Francisco Giants, St. Louis Cardinals, Detroit Tigers, and the Fukuoka SoftBank Hawks.

He has a win-loss record of 119-100, an earned run average of 4.26 and 1,260 strikeouts. Penny bats and throws right-handed and made his Major League Baseball debut on April 7, 2000 with the Florida Marlins. He won two World Series championships in 2003 and 2012, is a two-time All-star, and led the NL in wins in 2006. During his stint with the Fukuoka SoftBank Hawks, Penny appears to have faked an injury in his premier game, asking to be removed. He took two MRIs, which resulted in negative, and was released from the team a year later. Before joining the MLB, Penny was named Frontier Conference Pitcher of the Year when he was in high school. He was later named Arizona's Organizational Pitcher of the Month in August while he attended the Arizona Summer League. He was formerly engaged to dancer Karina Smirnoff and is now married to Oklahoma City Thunder dancer Kaci Cook as of August 1, 2013. 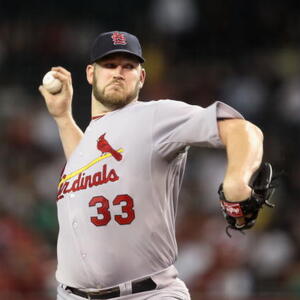